What does fire protection mean?

In case of fire, people must be able to evacuate themselves from a building. This is ensured by elaborate security concepts, which are ideally considered as early as the building planning stage. Fire protection is dedicated to this issue. The earlier fire protection is incorporated into the planning stage of a building, the better the architectural design can be implemented, thus avoiding costly retrofitting or additional costs. But what does fire protection actually mean? 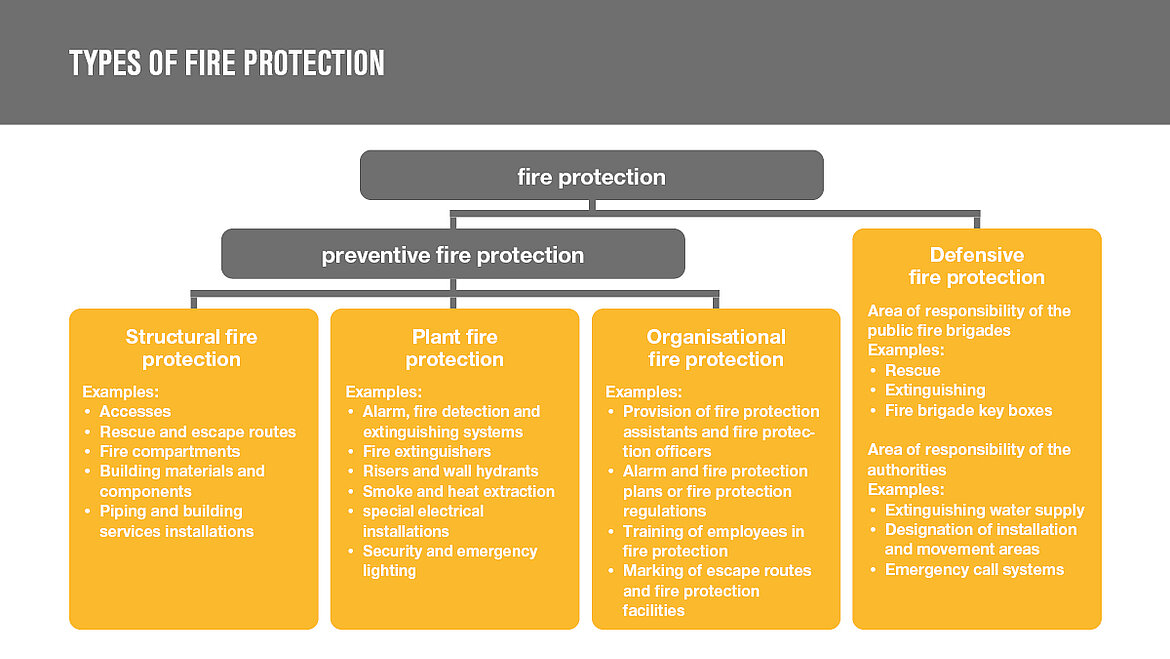 Defensive fire prevention, on the other hand, comes into play when a fire has occurred despite the preventive protective measures. This is where the fire brigade comes in.

The fire brigade takes care of firefighting, rescuing and recovering people and tries to keep the collateral damage as low as possible. Ultimately, serious damage can also be caused by smoke or extinguishing agents.

That's why it's important to prevent fires from happening in the first place! The top priority is to reduce the likelihood of a fire starting. Therefore, you should also ensure comprehensive preventive fire protection in your building.

Preventive fire protection is divided into three categories: structural, system-related and organizational fire protection. In the case of a new building, it is the architect's responsibility to implement the required fire protection measures. For existing buildings, it is mandatory that the fire safety officers, operators or owners deal with the regulations to be observed.

Structural fire protection is the first component of preventive fire protection. It is to be planned at the very beginning when constructing the building. This requires a fire protection concept that is adapted to the condition of the building and its use. Such a concept is prepared by an expert, an engineer with proven training or a specialist planner. The exact persons in charge vary from federal state to federal state. The concept includes the floor plan, all dimensions, the layout and number of rooms and the escape routes. This is a very helpful aid to maintaining an overview, especially for the fire safety officer. In addition, the current state can always be compared with the target state. 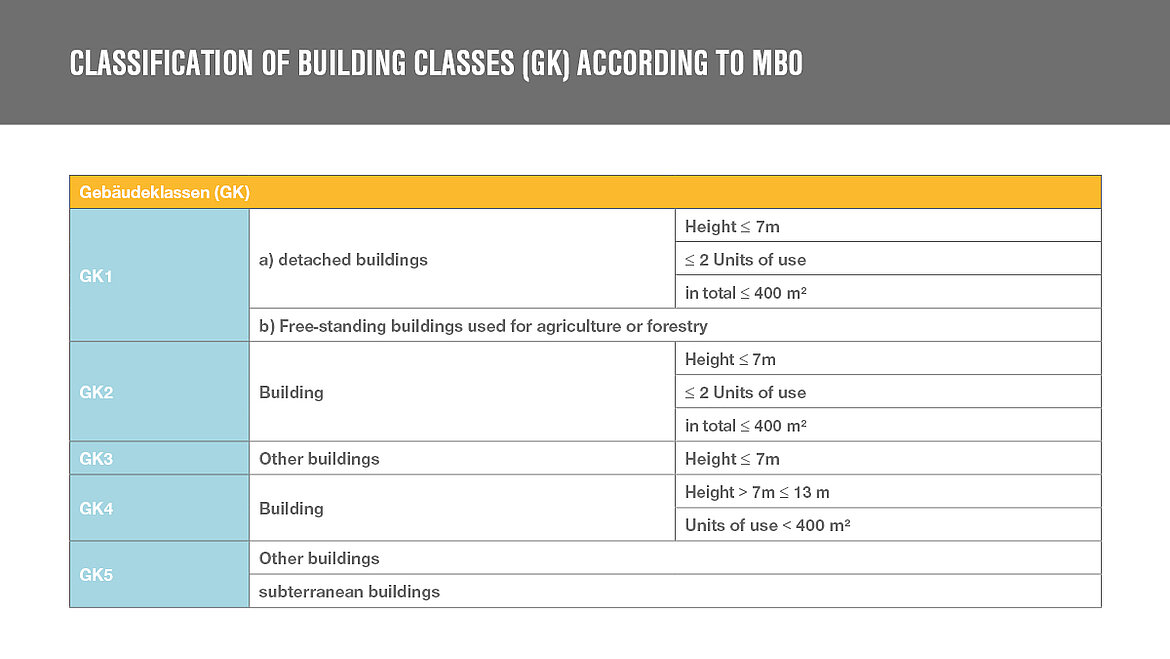 The requirements for structural fire protection of buildings depend on the building classes (GK).

Buildings are differentiated according to type, area and height. This results in building classes from 1 to 5.

As a rule: The higher the building class, the greater the fire protection requirements.

The building classes are defined in the Model Building Code (MBO).

This is the basis for the building regulations of the federal states, i.e. the State Building Codes (LBO), which differ somewhat in certain details, also with regard to definitions of building classes. 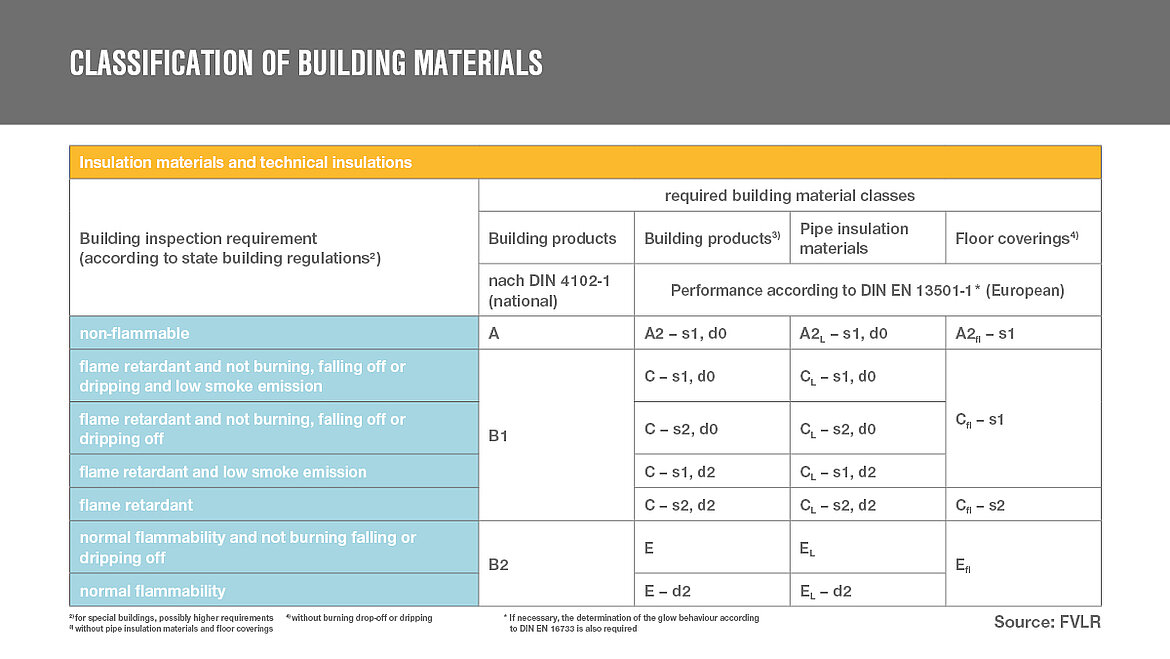 The EU classification according to EN 13501-1, on the other hand, provides for seven classes for flammability (A1, A2, B, C, D, E, F) as well as further classes for smoke development (s1, s2, s3), flaming droplets/particles (d0, d1, d2) and special classes for floor coverings (fl).

The classifications according to DIN 4102 and DIN EN 13501 are not directly transferable to each other. However, according to the Specimen List of Technical Building Regulations (MVV TB), the building authority designations such as “non-combustible”, “flame-retardant”, “normal flammability” and “easily flammable” can be assigned to both European and national classes. The Model Building Code also stipulates that at least normally flammable building materials must always be used.

In addition to the building material classes, building components are divided into different fire resistance classes depending on their fire resistance time. So, this is not about building materials and their flammability, but about building components and how long they can fulfil their function in case of fire. So, how long do walls, ceilings, doors and windows remain load-bearing and room-sealing? In Germany, classification is currently regulated equally by the German and European standards. The German standards' system is gradually being replaced by European standards.

European Standard EN 13501-2:
EN 13501-2 distinguishes the following criteria for describing the fire resistance of a component or product, regardless of its function in the building. DIN also acknowledges these criteria, but considers them collectively depending on the component function: Load bearing capacity (R), Room closure (E), Heat insulation (I). In addition, the performance time in minutes is given for each of these criteria, according to the following increments: 15, 20, 30, 45, 60, 90, 120, 180, 240, 360. As you can see, there is a finer time division here than according to DIN 4102. A building component whose load bearing capacity, room-enclosing function and thermal insulation are maintained for 60 minutes corresponds, for example, to the fire resistance classification REI60. Such as the Glass Roof Fire Resistance REI60 from skylight and fire protection specialist LAMILUX. The Glass Roof Fire Resistance REI60 defies the fire for a whole hour, protecting people and property, while preventing the flames from spreading to other parts of the building.

Preventive fire protection also means: Detect fires at an early stage. This is achieved with technical systems. Such systems minimize the number of fires or, at best, eliminate them completely. System-related fire protection includes:

In addition to the early alarm, the technical fire protection system also ensures the evacuation of the building by keeping escape routes free of fire and smoke or preventing the spread of fire.

That's why system-related fire protection is becoming increasingly important – whether for a new building or the conversion of an existing building.

LAMILUX is a specialist for electrical, control and ventilation systems. The family-owned company from Rehau is one of the leading manufacturers of skylights and is also known for its solutions for integral smoke extraction for buildings.

But it is not only buildings and escape routes that need to be planned for emergencies; fire safety training for employees is also particularly important. After all, the best escape plans are of no use if the people in the building do not know what to do in an emergency. Therefore, they should be trained in fire prevention and behaviour in case of fire. The respective fire safety officers or safety specialists are responsible for this. Besides the training, they have a supportive and advisory role and can also suggest measures.

Section 14 MBO: Fire protection
Structural systems shall be arranged, erected, altered and maintained in such a way as to prevent the development of fire and the spread of fire and smoke (fire spread) and to enable the rescue of people and animals and effective fire-fighting in the event of fire.

Protection from fire and smoke

The first protection goal in the Model Building Code (MBO) is to prevent the development of fire and the spread of fire and smoke. Fires are usually caused by ignition sources such as open flames, hot gases or hot surfaces, sparks from electrical equipment, lightning strikes or electromagnetic faults. Of course, human error or even negligent or deliberate arson can also cause a fire. Structural measures are of very little help in this regard. Above all, the structural measures described above influence the attainment of this protection goal. For example, the installation of non-combustible materials effectively prevents fire or smoke.

Rescue of people and animals

The second protection goal describes the rescue of people and animals. Here, rescue and escape routes inside and outside the building play the central role. In addition, early alerting – as well as lighting and marking of escape routes – facilitates self-rescue. Smoke extraction helps to ensure that escape and rescue routes remain usable.

In addition to the statutory protection goals, there may be individual protection goals for certain buildings or uses. These then require separate fire protection measures. This includes, for example, the protection of material assets or cultural assets. This is not regulated in building law, but must be agreed separately by owners or users. 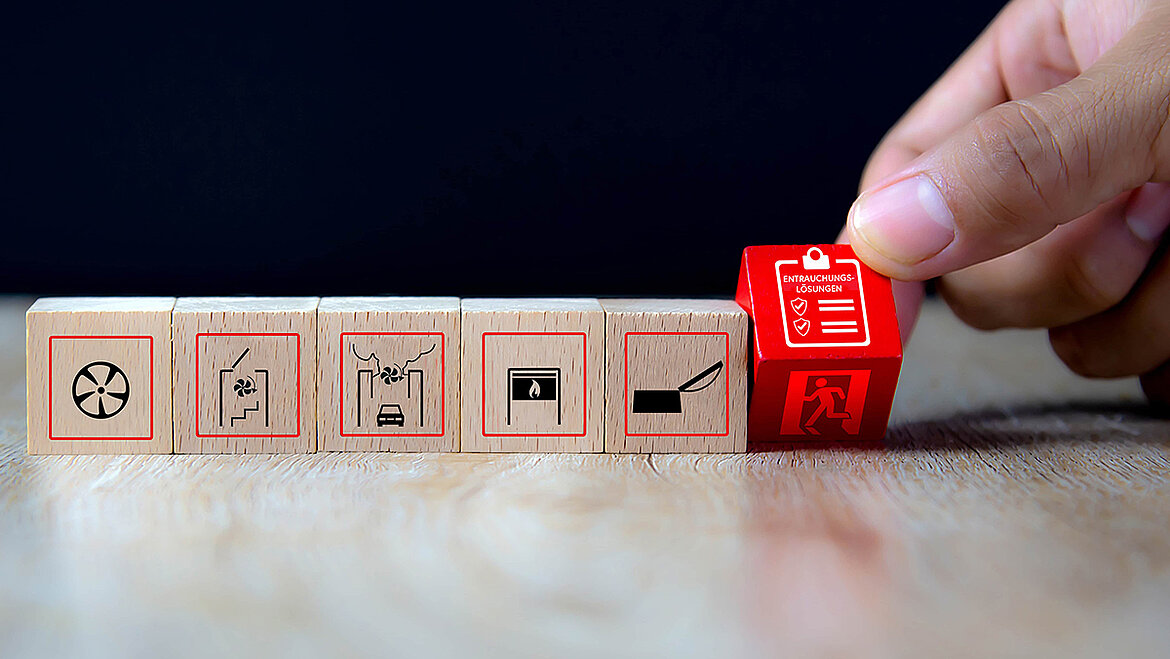 The fire protection concept considers various options for defensive fire protection, such as the extinguishing water supply, and also the requirements for system-related measures, such as sprinkler systems.

There are different steps in the development of the fire protection concept: preliminary planning, design planning and execution planning. The further the planning progresses, the more and more the building-specific fire protection requirements are specified.

Fire protection regulations? You can use this as a guide

In fire protection, a multitude of laws, regulations, directives and standards must be observed. To ensure that you don't lose the overview, we have summarized the various building regulations again for you. 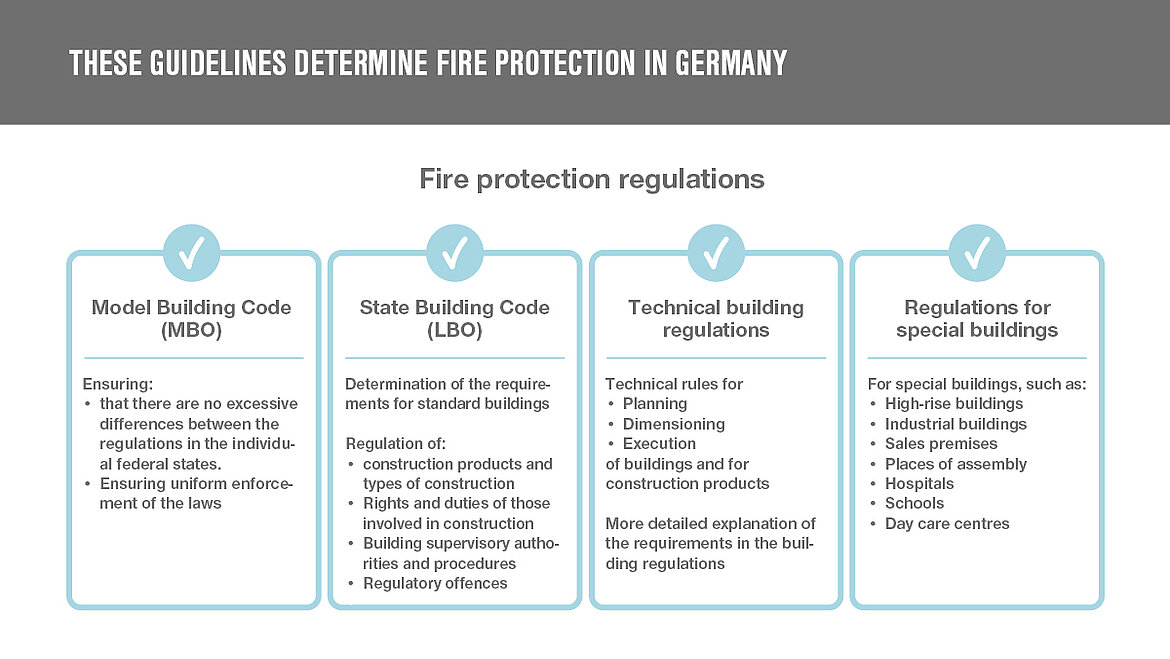 Fire protection for buildings is largely laid down in hierarchically ordered laws in public building law.

The Model Building Code is there to ensure that the legal and administrative regulations of the federal states do not diverge too widely and that uniform enforcement of the laws can be ensured. The Building Ministers' Forum was set up to this end. The Building Ministers' Forum is the working group of the ministers and senators responsible for urban development, construction and housing (ARGEBAU) of the 16 federal states. The tasks also include voting on the Model Building Code. It is intended to form the basis for the building regulations of the federal states, which are enacted by the parliaments of the individual federal states.

For the fire protection requirements for structural systems such as buildings, including the material requirements, the building regulations of the federal state in which they are erected are the most important. The State Building Codes (LBO) lay down the basic requirements for standard buildings. They also regulate:

In Germany, the State Building Codes (LBO) regulate the planning, dimensioning and execution of structural systems as well as the use of building products. They contain the basic material requirements and the associated procedural rules. For these LBOs, the German Institute for Building Technology (DIBt) developed a Specimen List of Technical Building Regulations for the first time in 2017. In the “Specimen List of Technical Building Regulations (MVV TB)”, the technical rules for the planning, dimensioning and execution of structures and for construction products have been brought together in one document, which is intended to explain the general requirements in the building regulations or in individual parts in more detail and make them more specific.

Conclusion: Fire protection must be considered at an early stage

Architecture & DesignModular buildings are receiving more and more attention and are becoming a real trend. And with good reason. What is modular building and what are its advantages?

Standards & TermsA hall roof must not contribute to the spread of fire. Quite the opposite: It must have a containing effect. DIN 18234 therefore defines measures to minimize fire spread via roofs – for skylights too.

Fire protection according to DIN 18234

Standards & TermsLast Mile vehicles make the final transport of goods more environmentally friendly and efficient. What is behind this type of vehicle and what are the challenges facing the industry?

Architecture & DesignArchitecture is playing an increasingly important role in the healthcare sector. The planners of the mega-hospitals in Denmark focus on one thing in particular: daylight.

Hospitals of the future