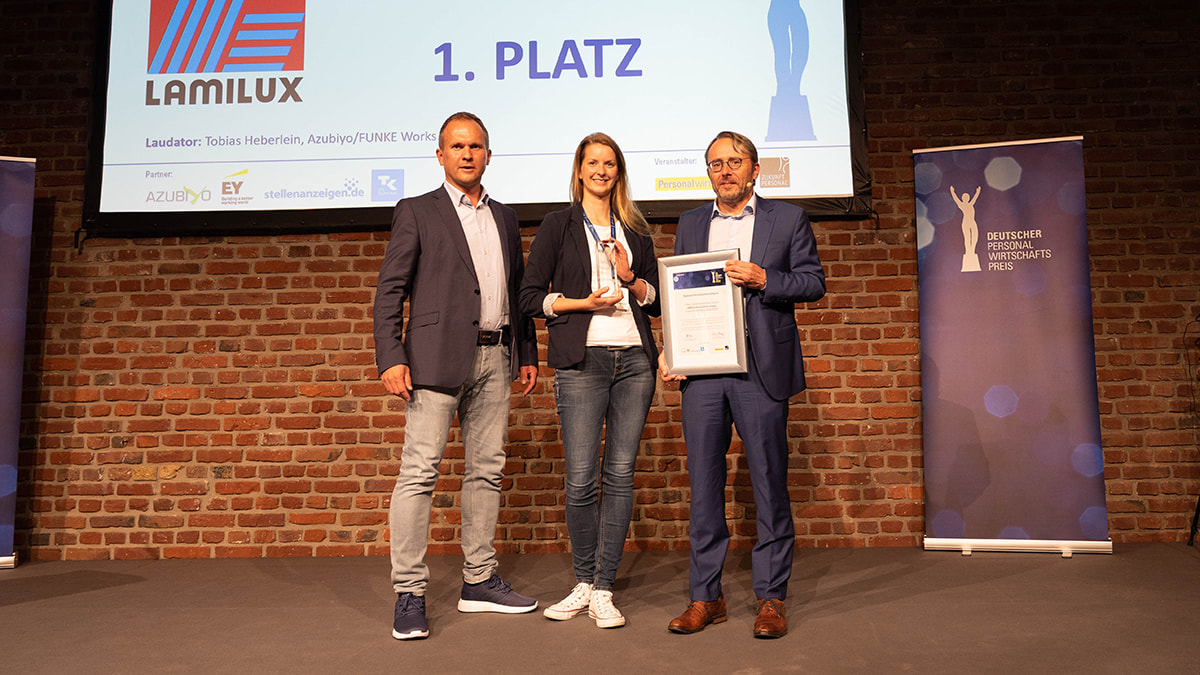 For its internally developed training concept EDUCATION for EXCELLENCE (E4E), LAMILUX won the German Human Resources Management Award 2022. This makes the Rehau-based family business the nationwide front-runner in the category "Training & Dual Studies", beating Continental and EnBW. The award ceremony took place in Cologne on 12 September, where personnel officer Neetje Brandt accepted the prize for E4E. E4E supports the personal development of the trainees and trains their social and key skills.

In the Training & Dual Studies category, the German Human Resources Award honours companies that are particularly committed to innovative and groundbreaking concepts for young professionals. "The German Human Resources Award is one of the most renowned HR awards in the German-speaking world and will be handed out for the 30th time in 2022. The event is organised by the trade journal Personalwirtschaft from the publishing house F.A.Z. Business Media in cooperation with the Zukunft Personal trade fair," says the award's eponymous website. A total of 78 companies entered in six categories, including big players such as Vodafone and thyssenkrupp.

In the run-up to the award ceremony in Cologne on 12 September, an introductory video was created that was used for the four-day voting. In the online voting, everyone could vote for the winners. The result of the voting as well as the evaluations of specially held workshops of the companies decided on the winners.

LAMILUX won the German Human Resources Award 2022 with its EDUCATION for EXCELLENCE training concept, which has already received several awards. In addition to the classic vocational training, the trainees are also supported in their social and personal skills. Through voluntary work, they learn to take responsibility for themselves and others and to actively shape society. For example, they train their organisational skills through special projects in the first year of their apprenticeship; in the second year, the focus is on helping activities. They are given one hour of paid time off per week for their projects. These include organising cinema shows for children and senior citizens, PC sponsorships or homework supervision.

In special courses and workshops, they can also think outside the box, for example attend a self-defense or business etiquette class or take a look behind the scenes of the Hof Symphony Orchestra or a court hearing. Because at E4E, the focus is on people's personal development.